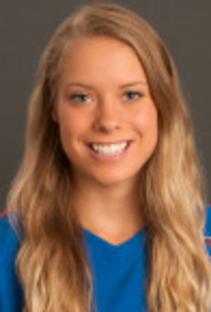 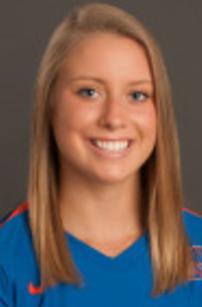 WELCOME TO THE WEST LIBERTY  PHOTO AND VIDEO PAGE​ 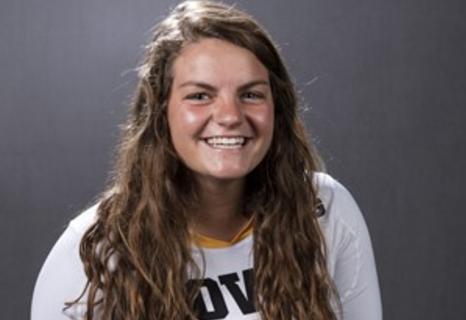 Passion with a Purpose Makes Kelly Go
By mark Becker/Sportscast Media
Passion is what Molly Kelly says is her best attribute, whether it is on the Iowa volleyball court or in one of her classes. Passion is how she lives her life. Passion is what has propelled Kelly to live out her dream and allow her to be where she is today.
Molly Kelly, a 2015 graduate of West Liberty High School, also grew up in West Liberty, a diverse community of 3500 people and about 20 minutes East of Iowa City. She noted that attending a smaller school and having the opportunity to play multiple sports had a big part in her becoming the athlete she is because of the different skill sets that the respective sports bring to the table.  In High School she participated in basketball, soccer, and softball, in addition to volleyball. In fact, in 2014 was the basketball team MVP. She held numerous captain positions with the different sports as well.  She always had an uncanny mindfulness that you would associate with someone much older as well as being one of the most supportive players on the team whether she was in the lineup or on the bench.
Kelly does have several connections to the University of Iowa. Both of her parents attended Iowa, with her father, Mitch Kelly, being part of four National Championship teams for the University of Iowa Wrestling program and also a current U of I professor. Kelly’s two older sisters, Shannon and Marissa have attended Iowa and her cousin Nicholas Baer plays basketball for Iowa as well. She also has a younger brother, Joe, who is a senior at West Liberty High School. So to say Hawkeye blood runs though her veins would be an understatement.
While in Junior High, Kelly had a dream on playing college volleyball and in particular in the Big Ten, because of the competitiveness of the conference. It wasn’t until later in her successful High School career that she began to realize that her goal/dream was going to be possible when the University of Iowa with new coach Bond Shymanski, offered her spot on the team.  Kelly was a four year starter at West Liberty. She currently holds the West Liberty Comets Volleyball records for digs, serving efficiency, digs in a single game, and digs per set. She also led Class 3A in digs per set in 2013 and total digs in 2014. She was a part of 2 state qualifying teams for West Liberty in 2011 and 2014.
Kelly went on to talk about the “grind” on Division I athletics. She added that she “embraced the challenge” and that mindset is everything in college, especially in regards to separating academics and volleyball. She mentioned that her club volleyball experience was critical in the physical preparation for college because of the number of repetitions that she would get during practice in what would be the offseason of school volleyball and also at the same time the club teams being flexible enough to allow her to participate in school sports and activities.
Kelly has some sound advice for high school student-athletes aspiring to play college athletics. She explains for students to enjoy the process. At the same time she realizes that it can be stressful, but be open-minded and have fun while it lasts. She stressed the importance of finding a school that has your major and that will prepare you best for the future that lies ahead.
Kelly’s favorite quote is “Respect All, Fear None” by Myndret C Busack. It has helped her keep everything in perspective during her collegiate career, it is very befitting for Kelly because if you know her she is exceptionally humble, but at the same time confident.

She is the epitome of that saying.

Maddie and Cassedi Simon: The Dynamic Duo
By Mark Becker/Sportscast Media
There is a saying that two heads are better than one. In the case of Maddie and Cassedi Simon, that is the way they live their lives. In their singular form, either of the “twins” are amazing in their own right, but put them together and they are an incredible duo that are destined for greatness in whatever they do.
The Simons grew up in West Liberty, IA, a small town of about 3,500 people in eastern Iowa. They graduated from West Liberty High School in 2016, and now play volleyball at Boise State in Idaho. Cassedi is a setter and Maddie is a defensive specialist. In high school, they were four-sport athletes by participating in volleyball, basketball, track and softball. They were always incredibly athletic and competitive in whatever they did. If you knew them as they were growing up, you could tell they were not your ordinary athletes.
During their four years at West Liberty, they helped the volleyball program get to two State appearances, finishing as Iowa State Runner-Up in 2015, which was the first time West Liberty had been in a state championship game.
Their high school volleyball record was 120-34; Cassedi amassed over and 3,200 assists, and Maddie countered that with almost 1,300 digs. It was a one-two punch that made it very difficult to ever count West Liberty out of any games. Cassedi’s list of accolades include, three time captain, and named  to the Iowa Girls’ Coaches Association 2015 Elite All-State team made up of eight players from all five classifications, the IGCA 3A Player of the year and All State Tournament Team captain as a senior. In addition, she was named All State two times, a finalist for the Andy Collins Setter Of The Year award, three-time All Conference, Muscatine Journal and Iowa City Press Citizen 2015 Players Of The Year awards. Maddie had her share of recognition by being named to the All State team and All Tournament Team in 2015, River Valley Elite All Conference, first team All-District as well.

It was early in their senior year that they decided to attend Boise State to play volleyball. During the club volleyball season in the spring of their junior year, Boise State Coach Shawn Garus noticed them at a tournament in Colorado. “He saw us play for a while, talked to our coach, and a few days later we were already setting up a visit,” Maddie explained.  Cassedi mentioned that she didn’t really know where Boise State was. “I just remember my mom telling me that it was the school with the blue football field,” Cassedi recollects.  A few weeks after that, they visited campus for the first time. “We fell in love with it on our first visit,” they both commented.  They also both expressed that their gut-feeling said this was the place for them. “ I like the coaches, the program was on an uprising path, and I could see myself going there,” said Maddie.  It was a match that was meant to be.
The transition from high school to Boise State was challenging for them. Maddie stated that it was a big “wake up call” for her, while Cassedi explained that it was not only a difficult transition from a physical aspect, but also from the mental side. There was a learning curve in adapting to a “whole new offense, new team, and a whole new way of playing.” They both added that being away from family has been very difficult for each of them, but was made easier with them there together. They both understand that the whole experience with college and distance from family is part of the growing up experience.
Both Simon girls mentioned that they really enjoy working with younger players and hope that they have had an impact on them. They both realize that they were once in that same position, not that may years ago, looking up to the older girls and wanting to be like them. Cassedi brought up that she is always aware the there were a lot of eyes on you. “I wanted to make sure those eyes were looking at a strong, confident, kind and nice person.” Maddie commented how rewarding it is to have girls come up and give you a hug after you had helped them at camp, and they remembered her. In talking about advice for younger kids looking to play college sports, they both mentioned to keep an open mind, that you have to work incredibly hard, and make sure you research the whole school to make sure it is a fit for you. They also mentioned they would be interested in coaching at some point, also.

The twins both have an outstanding outlook on things. They are both very grounded and humble. In fact, Cassedi’s motto is from a Tim McGraw song, “Always be humble and kind” and Maddie explains that “ God will guide me wherever he thinks I need to go.”

When asked about what they feel is their best attribute, Maddie mentions her no nonsense, hardworking style, while Cassedi feels her relationship with the team and her encouraging way is her contribution. As you can tell by their mottos, they are both high-quality individuals that this writer has had the pleasure of knowing.

To know Cassedi and Maddie is to know humility, focus, and good heartedness. I believe if you look up character in the dictionary, you will find their names listed beside it.